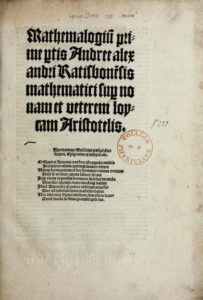 Andreas Alexander’s Mathemalogium, printed locally during his tenure as professor of mathematics at Leipzig (1502-4), sought to investigate and validate Aristotle’s logic mathematically. In it, Alexander suggested that rather than trying to observe the effects of natural phenomena, mathematics could be used as a tool to justify them from their first causes. Dee would embrace this approach in his mathematical justification of astrological phenomena, even though for Alexander (as for Aristotle) such techniques were limited to their individual sciences and could not be exported to others.

The purchase inscription of this copy places it in Dee’s hands soon after his return from Louvain to London in 1551, where Dee taught mathematics while continuing his integration of mathematical and astronomical study. His notes in the volume also reveal two further contexts for his reading of the book. The first comes in his comparisons between the concepts presented by Alexander and Aristotle, and those which Dee encountered in Euclid. Most significant of these is his diagram of how Euclid’s views on demonstration differed from those of Aristotle [D5r]. Elsewhere in the volume Dee would remark that Euclid’s justifications came not from signs but by causes [Biijv], perhaps cementing the distinction he would later draw in his Groundplat to Euclid.

The second context is more personal to Dee, coming from a note following the colophon with the date of 1555 that records his reading of the volume in the house of Edmund Bonner (d. 1569), a rare mention of a setting for reading. Bonner had recently been re-installed as Bishop of London after the coronation of Mary, only to be removed four years later when Elizabeth restored the country to Protestant practice.

Despite Dee’s reference in the Mathemalogium to the bishop as his “singular friend,” his presence in Bonner’s house did not start off voluntarily. Dee had been arrested in May of that year on suspicion of conspiracy against Mary (for calculating her horoscope) and had been placed in Bonner’s custody to determine his orthodoxy. By the end of that year, however, he is noted as serving as Bonner’s chaplain, and it is tantalizing to think of the part Dee’s reading must have played in his conversations with the Bishop during this time. This small note also highlights the physical and social social, as well as the intellectual, boundaries which Dee traversed in his thought and work.