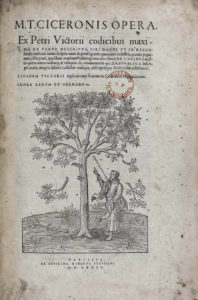 The second member of a storied dynasty of French printers, Robert Estienne achieved renown for his editions of biblical, classical, and Greek texts. That fame would bring with it a much publicized controversy with the faculty of the Sorbonne and lead to his voluntary exile in Geneva toward the end of his life. This edition of Cicero’s collected works, produced in four folio volumes between 1538 and 1539, would set the standard for the reading and reception of Cicero in France and secure Estienne’s place in the orbit of the intellectually aspirant monarch of France, Francis I (1494-1547). In 1539 Estienne became the King’s printer in Latin and Hebrew, to which Greek would be added a year later. The grand appearance of these volumes, combined with their promotion of a biblical humanism, ensured their placement in university communities as well, and Oxford and Cambridge were no exceptions.

Dee’s acquisition of these volumes, which may have been bound by a previous owner, also comes at a key time in his early career: his appointment in 1546 as under-reader in Greek at Trinity College, and the beginnings of his European travels. The copious notes he made in Cicero’s letters and speeches call attention to the parts of the works he was reading as well as to the people and topics covered. The books show Dee at his most methodical, breaking down the texts he read (perhaps in order to teach them) and even compiling glossaries of expressions and terms he found in them.

As thorough as he was, it is evident that this edition of Cicero was not the only one that Dee ever expected to have at hand. His later library inventory lists numerous copies of genuine and pseudo-Ciceronian works as well as the thesauri and indexes also printed by Robert Estienne, and he continued to acquire the printer’s later Hebrew and Greek works. Even though he bypassed much of the editorial commentary in the volume (provided by the Florentine humanist Pietro Vettori) corrections to the text suggest that he may have made use of the annotations of additional commentators as he made his way through the book.