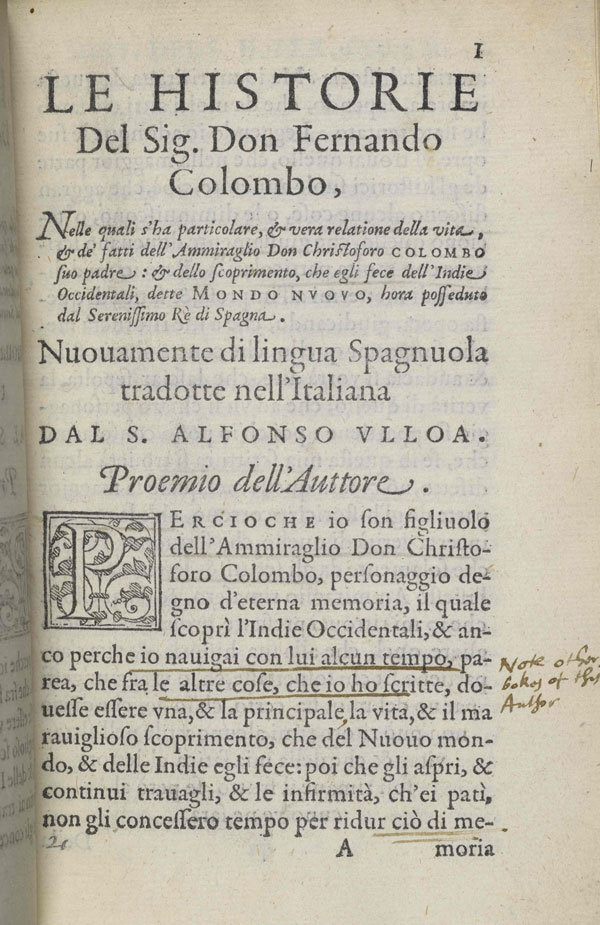 The younger son of Christopher Columbus (though born out of wedlock), Fernando Colón spent nearly his entire life as a traveler and courtier. An avid defender of his family’s privileges on both sides of the Atlantic, his diplomatic and legal services to the Spanish monarchy expanded greatly when the throne passed to Charles of Habsburg (Charles V) in 1516. The income from his family title, along with his travels in Europe, also allowed him to acquire a library of over 13,000 books. Fernando Colón’s compilation of his recollections of his father’s life and voyages was in progress during the final years of his own life, and evidently he never completed them before his death in 1538. No manuscript or, indeed, Spanish version of the text survives, making the Italian translation published in 1571 the only surviving text of the account. The extent to which the text was emended by diplomat and historian Alfonso Ulloa, who also translated many other Spanish texts into Italian, or by any of its prior owners, remains a matter of debate. 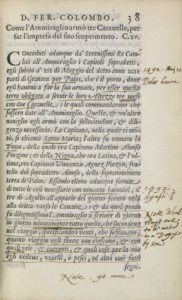 In addition to showing the linguistic range of Dee’s reading, the Historie contains substantial annotations in English, perhaps his way of dealing with a less familiar language. The approach Dee took to annotating the work, however, and the thoroughness of his observations, show that he missed little in the account. In addition to charting the places and peoples mentioned in the biography, Dee’s annotations aim to track the distance between places, the size and composition of fleets, and other navigational tips. Though no dates are attached to Dee’s marginalia, his reading of this book likely took place during the mid-1570s, as he compiled two treatises on navigation and discovery in the service of the Elizabethan regime. These same strategies for approaching travel, time, and geography in the Historie are also evident in the way that he approached the histories that he read roughly contemporaneously, such as the ancient history of the Britons found in Geoffrey of Monmouth’s Historia regum Britanniae. In this book, the two strands intertwine in Dee’s tracing of the journey of Madoc, the legendary Welsh prince (and thus an ancestor of the Tudors) who had supposedly discovered the New World long before any other nation could lay claim to it.