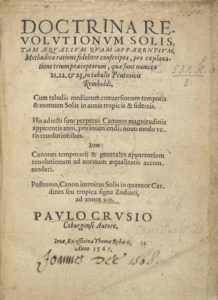 A follower of Philip Melanchthon and an influence on Joseph Scaliger, Paulus Crusius (1525-72) was one of a number of astronomers seeking to use observation and ancient texts to critique and comment upon the biblical tradition. In this short tract, Crusius sought to refine Copernicus’s theories and define more exactly the variance in time that could occur for the solar orbit. This would allow for the more exact calculation of hours in different places, and more importantly would enable the church calendar to be more accurately corrected. In his later writings, Crusius would use this information, in part, to produce a triangular timeline depicting world history in terms of the strict intervals between various events.

Dee’s observations in the book range from comments on Crusius’s method to interpolations based on it. He uses the solar tables supplied as appendices to the book (which account for a third of the work) to calculate the difference in time between calculations made in Tübingen and Koenigsburg, and on the flyleaf he gathers classical, biblical, and medieval sententiae about the sun.

See also D. Rosenberg and A. Grafton, Cartographies of Time: A History of the Timeline (Princeton, NJ, 2010).