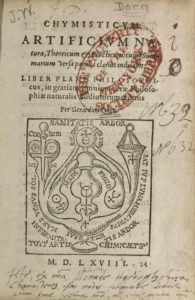 Little is known about the life of Gerhard Dorn except that he was born, in Mechelen in modern-day Belgium, around 1530, and began publishing books in the early 1560s. His writings strongly support the influence of Paracelsus, and as an editor and translator Dorn served as a conduit for the publication of Paracelsian and pseudo-Paracelsian medical and alchemical works throughout his lifetime. This short tract separated Dorn’s overview of the chemistry into theoretical—on natural and artificial generation and corruption—and practical questions, and also included woodcut diagrams of laboratory equipment and techniques.

Aside from some small portions of the praxis section, the work is not heavily annotated by Dee but, a note on the title page suggests why this work might have caught his attention. He states that Dorn has used the hieroglyphic monad, Dee’s symbol for the unity of the cosmos, as his basis for drawing the symbols in the Chymisticum artificium natura. The symbol was the subject of a short explication that Dee published in 1564, and Dee speculates that this must have been Dorn’s source for the work, done apparently without Dee’s knowledge or consent.

The monad also provides a link to a later owner, John Winthrop, Jr., who was active in the government of both the Massachusetts Bay and Connecticut colonies, and adopted the device as his personal symbol. Winthrop inherited this and Dee’s Paracelsian books from his father Adam, and an inscription in his hand on the flyleaves of both the Baderbuchlin and the Buch meteororum (both viewable in AOR) state that Dr. Dee’s notes make the copies more valuable. Winthrop’s early pursuits suggest why these particular volumes may have held his interest. In addition to his civic activities, he was a traveling physician, a practicing chemist, and an avid astronomer.