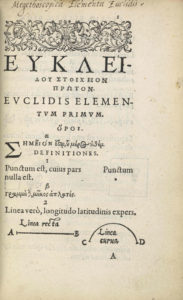 Euclid’s treatise on the foundational principles of geometry, first promulgated at some point during the fourth and third centuries BCE,  would remain the bedrock of mathematical study for millennia. From the 1480s on, printed editions looked to convey the diagrams of the text that circulated in manuscript in elaborate ways (Erhard Ratdolt’s 1482 edition even going so far as to print the dedication letter of the treatise in gold in some copies). Dee’s library catalogues record that he owned over a dozen editions of the book, along with several manuscript copies. This copy, the only one currently known to have come from his library, contains very little intervention to its text. Apart from few corrections supplied from other copies, Dee’s annotations consist mainly of notes on the properties of lines and radii on the front and rear flyleaves. 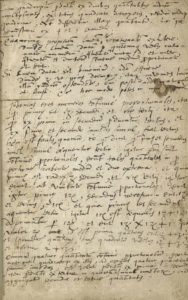 Dee’s thoughts on and about the text carried beyond the marks he made in any particular copy. He had lectured on Euclid’s Elements while in Paris in the early 1550s and continued to teach the text after his return to England. Most enduringly, the first English translation of Euclid’s Elements (1570) contained a “Mathematicall Preface” written by Dee as well as a number of printed “annotations” in books 10-13 of the translation, some of which are dated. Perhaps the most strikingly visual annotation Dee made to this edition, however, is the “Groundplat” of the sciences and attendant arts that he composed for the work, highlighting the ways in which all applications of mathematics, from the theoretical to the mundane, flowed from the practice of arithmetic and geometry.

See S. Johnston, “John Dee on Geometry: Texts, Teaching and the Euclidean Tradition,” Studies in History and Philosophy of Science 43 (2012): 470-79; J. Rampling, “The Elizabethan Mathematics of Everything: John Dee’s ‘Mathematicall Preface’ to Euclid’s Elements,” BSHM Bulletin: Journal of the British Society for the History of Mathematics 26 (2011): 135-46; and B. Artmann, Euclid: The Creation of Mathematics, (New York, 1999).