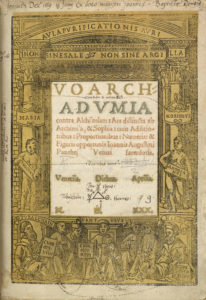 More so than most genres of early printed books, alchemical books can never be considered “complete” or finished works. Their composition and attribution varied across centuries and was often intended to obscure, rather than plainly illuminate the mysteries that they purported to convey. Such is the case with the Voarchadumia, a treatise whose first parts were printed in 1518 as the Ars & theoria transmutationis metallicae. Its author, the relatively obscure Italian author Giovanni Agostino Pantheo, attempted to explain the art of transmutation (as its title suggests) not as alchemy, but rather as part of an attempt to fundamentally alter the real essence and substance of metals, not just change their appearance. The text, with its elaborate symbolism and description of the art’s main experiments—a format common to many alchemical books—also contained descriptions and woodcut illustrations of the metalworking equipment necessary to undertake the procedures it described. 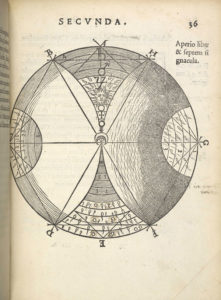 The coded nature of alchemical works made them apt candidates for emendation and annotation, and Dee’s copy of this book is no exception. As was the case for the horoscopes in his copy of Cardano, the margins contain calculations and notes based on the printed symbols in the work, allowing Dee to comment and expand upon the cabalistic methods proposed by Pantheus. Furthermore, blank leaves have been inserted into the volume to allow Dee to write out lengthier passages from the the previously published Ars metallicae and juxtapose them with the later text. The title page of the Voarchadumia, printed with gold ink to underscore its significance (and perhaps potential), preserves Dee’s interpretation of its allegorical border, and also records the gifting of the volume to him in 1559. Dee’s own iconography is also present on the title page of the volume in the form of his hieroglyphic monad, unifying the elements in the cosmos and associating them with their classical figures: Hermes/Thoth in the case of Mercury, and Tubal-Cain in the case of Jupiter.