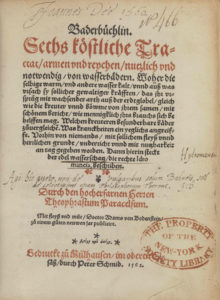 The career of the physician and polymath Theophrastus von Hohenheim (1493-1541) was fraught with confrontation and controversy even in an age known for both. One of several sixteenth-century figures who called for the reform of Galenic medicine, Theophrastus vocally urged its abandonment in favor of new forms of inquiry and adopted the pen name of Paracelsus after 1529 in the wake of harsh criticism from the medical establishment. His earlier peripatetic lifestyle around the university towns of the Holy Roman Empire suggests a similar pattern of confrontation in other subjects, most notably religious practice. Paracelsus published widely and across a variety of formats and languages, and also left behind a significant corpus of manuscript material, published in the decades after his death.

Paracelsus’s medical works posited illness as an imbalance of chemical deposits in the body and advocated for the transformation and purification of these metals through chemical processes. The Baderbuchlin, which describes the healing properties of baths and the minerals added to them, stresses Paracelsus’s emphasis on the observation of experiments, which he referred to as “fructi.” Dee has noted such references in both of Paracelsus’s books with a prase that echoes the phrasing of Matthew 20:7 (et fructibus eorum cognoscetis eos), suggesting an intertwining of natural and spiritual interests. He also notes, in English, locations in England where similar phenomena to the ones described in the Baderbuchlin could be encountered.

Dee’s notes on the book’s flyleaves, on the other hand, bookend the medical practice of Paracelsus between two alchemical works. Those on the front contain a table of contents to Paracelsus’s own treatise the Archidoxis, while the rear leaves note the location of a “skroll” of the works of Ramon Lull in the possession of a vicar in Swannington, Norfolk, which Dee duly recorded.