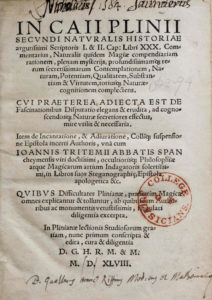 Active in the first half of the sixteenth century, Hermann Walter Ryff (styled Medicus & Mathematicus by Dee in his inscription on the title page) was a voracious collector, translator, and, in some accounts, plagiarist. His career as a physician and surgeon took him around Germany, and his publications cover all of the topics that a medical humanist and peripatetic scholar could expect to encounter. His use of this material—most notably the plates from Andreas Vesalius’ anatomical works—without acknowledgement caused Vesalius to censure him as the “Strassburg plagiarist,” and Ryff drew similar scorn from his contemporaries in German medical practice, most notably Leonhart Fuchs.

Outside the sphere of anatomy, Ryff also translated the works of classical authors into German, often with commentary. This short treatise, published in the year of Ryff’s death, may have had its origin in university lectures, in this case on the sections of Pliny the Elder’s encyclopedic Natural History that have to do with the practice of magic and the occult. Of special interest to Dee are the discussions of the different types of divination that could be based upon the letters of a person’s name as well as on their horoscope (sig. E3v), to which Dee has added additional properties for letters, taken from “an old book.”

While Dee’s notes in the text are largely minor, the flyleaves contain two larger preservations. The first of these is an astronomical chart in Dee’s own hand. The second insertion is the text of a fifteenth-century exorcism, copied in a highly idiosyncratic Anglicana hand and tipped into the rear of the book. The rear of the fragment contains the copied text from the note on e3v, in a hand that is more readily identifiable as Dee’s. While the slip does not mention any source, it raises interesting questions about the relationship between the two texts it preserves, as well as its relationship to the book in which it is now bound.