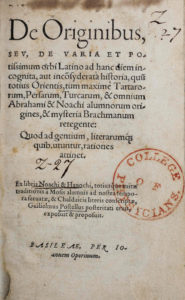 Hailed as one of the first orientalists, the Parisian scholar turned Jesuit missionary Guillaume Postel (1510-81) wrote across the range of interests of early modern universalism, and with the urgency that his own predictions instilled in him. By 1530 he had become proficient in Greek and Hebrew, and in the decade that followed he would publish a number of treatises on Eastern languages, including one of the first Arabic grammars to circulate in Europe. His scholarship from this time on was oriented towards establishing and expanding a universal Christian Church in the areas of his interest, which included the translation of the Gospels into Arabic and parts of the Koran into Latin, as well as in the study of Cabala – such attempts to mine the mystical exegetical traditions of Judaism as an aid to Christian theology had been revived in the Renaissance by syncretists from Pico della Mirandola on.

Postel’s desire to proselytize, combined with a fall from favor at the French court, led him to renounce a teaching position at the University of Paris and travel to Venice, where he joined the Jesuit order, a position of stability that nonetheless proved to be short lived. The increasingly mystical nature of Postel’s writings would bring him into conflict with the Catholic Church, who condemned his writings in 1555 and imprisoned him the following year. The Inquisition ultimately pronounced him not heretical but insane—a worse fate in his eyes—and after a brief return to teaching in Paris he was confined in 1563 to the Priory of Saint Martin, where he spent the rest of his life.

This treatise, likely composed at the time of Postel’s initial linguistic research and embassy to Istanbul, strove to reconstruct the Noachian origins of all peoples, as well as the common language that would have been spoken before the Babelic confusion. Its reissue came during Postel’s most prolific period of authorship—he considered the year 1556 to be portentious—and evinces his connections to some of the leading Protestant printers and scholars of the period. During his claustration he would collaborate with Christophe Plantin on the landmark Polyglot Bible, while urging the Swiss printer to communicate his other writings to far-left Protestant sects like the Family of Love. His connections to Plantin were facilitated in part through the cartographer and scholar Abraham Ortellius. Postel’s ties to the University of Paris, as well as his search for a unifying language that would unlock the mysteries of both history and theology, overlap particularly well with the pursuits of John Dee, whose ownership inscription has likely been erased from this volume.