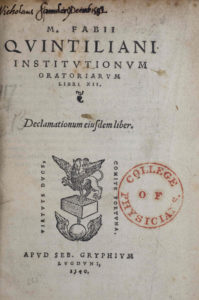 Written in the first century AD, Quintilian’s treatise on the education of schoolboys in rhetoric made rich use of the works of his golden age predecessors, and remained an essential part of the curriculum throughout the Middle Ages. Quintilian advocated that students be taught rhetoric starting at an early age, and preferably should be encouraged to begin in Greek rather than Latin. His first book, addressing the state of early education in Augustan Rome, is as engaging as it is pithy, and the books that followed, though more technical in nature, are full of reflections upon and comparisons with other Roman authors.

The continued canonical status of this text for sixteenth-century Latin education is reflected in the person of its printer, Sebastian Gryphius of Lyon. Drawing from the talent pools of the Venetian and Parisian book trades, the merchant guilds of Lyon used their commercial privilege and prowess to produce books for consumption well beyond the boundaries of the city, which saw its heyday during the first three quarters of the sixteenth century. Of the Lyonnais printers operating at that time, Gryphius epitomized the trade both in his background (his type came from a Venetian shop closely associated with pirated Aldine editions) and in the types of books he printed. His output over a thirty-year period consisted of legal texts, editions of the popular emblem books in the tradition of Andrea Alciato’s Emblemata, and, above all, editions of Latin school texts. Books bearing his gryphon device can be found in libraries of many of Dee’s contemporaries in the colleges and professions in early modern England.

Dee’s (erased) ownership inscription in this volume (1545) puts it in the company of his other collegiate books, his Parisian editions of Cicero and of Ovid. Like the Cicero, it is thoroughly annotated in a clear, distinct hand, with both author’s and reader’s interest in Greek evident in the large number of annotations in that language. Though most of these are copies of terms directly from the text, they do highlight Dee’s evolving role as both a student and a teacher of Greek. However, though annotations in the Cicero volume and the Quintilian (which is adorned with cross-references to Ciceronian dialogues) contain examples of marginalia in this hand, the Cicero volumes, along with the other books in Dee’s library, display many different and additional styles. Comparison of this kind would be useful for tying together not just the function of these books at any given moment, but the development of their reader as he returned to them over time.

See I. Maclean, “Competitors or Collaborators? Sebastian Gryphius and his Colleagues 1528-1566,” in Learning and the Marketplace: Essays in the History of the Early Modern Book (Leiden, 2009), pp. 271–89.