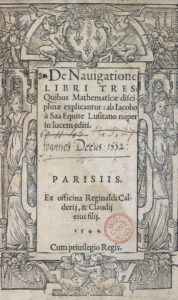 Drawing on advances in the scientific disciplines, the art of navigation became the central concern of maritime European nations looking to expand their influence in an age of discovery. Improved maps and charts, instruments, and methods for measuring time and speed occasioned a rush of attempts to document advances in the field and spur new expeditions, spearheaded by the Spanish and Portuguese monarchs.

This introduction by the otherwise unknown Portuguese author Jacobo a Saa attempted to use the practical art of navigation as an introduction to the study of the principles that grounded it. The practical component of the edition (contained in the final book) includes a number of revolving dials to aid in the practice of common calculations, some of which are still intact.

Although one might expect this text to have greater resonance with the other accounts of exploration in the AOR corpus, Dee’s notes in the volume show more interest in the theoretical introduction in the first book than in the practical information on navigation contained in the latter two. This is perhaps explained by his acquisition of the book in the 1550s, when his interests lay more in the teaching (and schematizing) of the mathematical disciplines than in exploration. Nevertheless, he noted some of the practical techniques of navigation, and evidence of the foundational nature of mathematics to many of Dee’s pursuits appears as well. A pencil drawing of unknown origin at the back of the text shows Dee’s hieroglyphic monad imposed on a coat of arms.