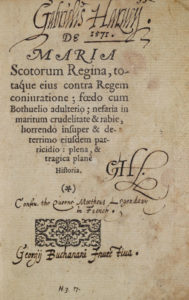 This is one of many pro-English tracts opposing Mary Queen of Scots, written by the worldly humanist and literary Scot (and one-time tutor of Michel de Montaigne at the Collège de Guyenne in Bordeaux), George Buchanan. This utterly partisan polemic inaugurated in print a discourse that had already begun years earlier in 1568 with Mary’s exile in England and Queen Elizabeth’s subsequent requirement of the Earl of Mornay, James Stewart, that he defend his armed opposition to his sovereign Scottish queen with proof of her illegal actions. This book, perhaps more than any other, shaped the now familiar narrative of Mary as an increasingly unhinged tyrant who ultimately descended into reckless criminality and desperate conspiracy. The text embodies both the formality and the sense of inevitability that surrounds a criminal show trial performed before a court of law, balancing argument and the piling on of an overwhelming body of evidence (following on actual 1568 commissions convened in closed hearings on the matter at York and Westminster). The material printed here for the first time in October 1571 was an immediate response to the Ridolfi Plot, which would have married the Queen of Scots to the Duke of Norfolk and unseated Elizabeth at the hands of Spanish invaders. An English-language translation in an affected Scots dialect—suggesting no English participation though, in truth, a work of pure English propaganda—Ane detectioun of the duinges of Marie Quene of Scottes (1571), appeared immediately thereafter to amplify the effect of this Latin original.

Mary’s son, King James VI of Scotland, reviled Buchanan’s more extreme brand of popular sovereignty (Buchanan’s strong response to Mary’s presumed tyranny), particularly as it was promoted in his later chronicle of Scotland, the Historia of 1582, which was ordered purged by the Scottish parliament shortly after its appearance in print. Ever a close student of ill-advised speech against a crowned head, Harvey’s extensive manuscript quotations on the final page of the present volume from Book 2 of James’s Basilikon Doron captures the subsequent harvest of Buchanan’s defamation of this future king of England’s mother in De Maria Scotorum regina, including James’s full-throated and definitive rejection of the “infamous invectives” of Buchanan himself. See Tricia McElroy, “Performance, Print and Politics in George Buchanan’s Ane Detectioun of the duinges of Marie Quene of Scottes,” in Caroline Erskine and Roger Mason, eds., George Buchanan: Political Thought in Early Modern Britain and Europe (Farnham, Surrey, and Burlington, VT: Ashgate, 2012), 49-70. 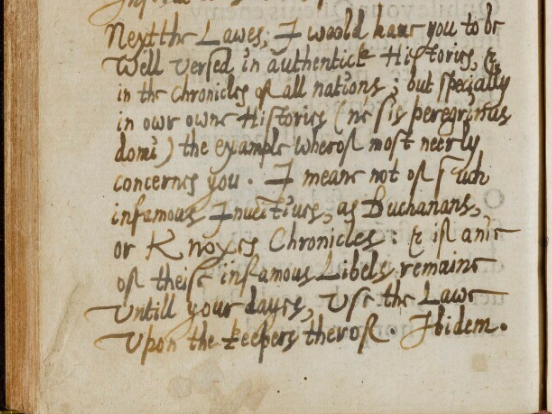