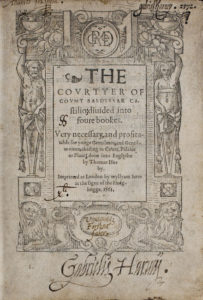 [The structure and content of this imprint is described in the corresponding essay, above, on Harvey’s Italian-language Castiglione, Il Cortegiano, in the Archaeology of Reading corpus of books.] It is especially interesting to examine Harvey’s annotated copy of a fairly early Italian edition of Castiglione’s Courtier (University College London’s 1541 copy of the Giolito edition) alongside his separately annotated, early English translation of this monument of Renaissance courtly literature. Thomas Hoby was a gentleman traveler and a courtier himself whose long continental sojourn during much of the reign of queen Mary I was likely motivated by religious causes. Hoby undertook this translation, his most lasting and influential literary achievement, in Paris while still in his early twenties (1552-53), though the work remained unpublished until the appearance of the Seres imprint of 1561. Seres, a loyal servant of William Cecil, was bestowed a lifetime privilege to print psalms and primers, though he also favored the publication of English translations of influential classical, and more recent and presumably saleable, continental works, particularly during the 1560s and 1570s. Among the more notable examples are Arthur Golding’s lively and influential Gallic Wars of Julius Caesar (encouraged by William Cecil himself) and Ovid’s Metamorphoses(echoes of which have been detected in Spenser and Shakespeare), as well as modern treatises such as Thomas Blundeville’s translation of Frederico Grisone’s Offices of Horsemanship.

Harvey’s annotations throughout the English Covrtyer are effusive with praise, admiration, and vitality, nowhere more so than in the back matter of the book, amid the final summary “A Brief Rehearsal of the Chief Conditions and Qualities in a Courtier” (in the image below) and “Of the Chief Conditions and Qualities of a Waiting Gentlewoman” (which begin on signature Zz.iii r). There, as elsewhere, Harvey’s courtly paragon seems always to be the personal figure of his friend and patron, Sir Philip Sidney, literally his “Castilio, sive Aulicus,” which echoed a chorus of similar praise, living and posthumous, for the young Sidney: “The most beautiful demeanor of the princely grace, from general and special decorum” [Aulica[e] gratia[e] pulcherrimus habitus, è generali, et speciali decoro]. It is unlikely that Harvey could read such a book as this without recalling his own presentation at court before the Queen during a Royal Progress in 1578, where she allowed him to kiss her hand and reportedly professed that Harvey himself had the look of an Italian. See Peter Burke, The Fortunes of the Courtier: The European Reception of Castiglione’s Cortegiano (Cambridge: Polity Press, 1995), esp. 55-80; L. G. Kelly, “Hoby, Sir Thomas;” and Elizabeth Evenden, “Seres, William,” in Oxford Dictionary of National Biography, online ed., January 2008, http://www.oxforddnb.com. 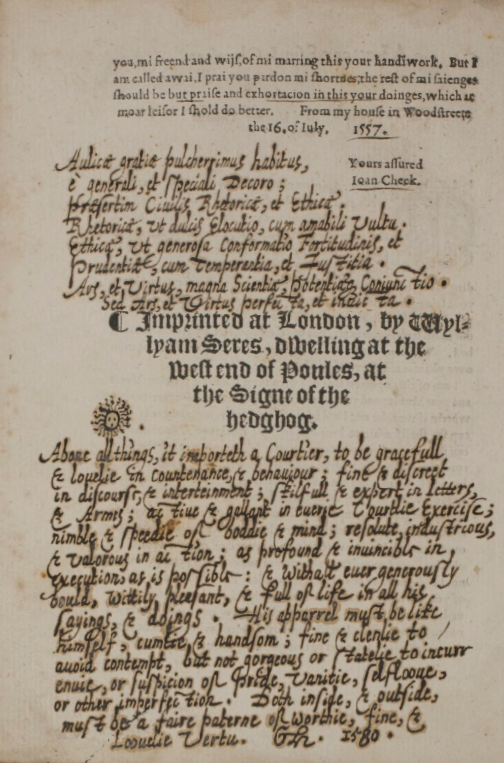