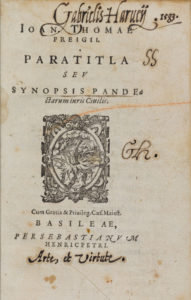 Freigius’s logical treatment of the Digesta seu Pandectae, the digest of Roman civil laws dating back to the 6th-century CE Roman emperor Justinian I, informed a significant portion of Harvey’s larger education as a legal scholar at Cambridge during his studies there between 1578 and his attainment of the degree of Bachelor of Laws in 1584, a period, Lisa Jardine and William Sherman have observed, that overlapped with his secretarial service to the Earl of Leicester during which he provided particular “knowledge transactions” with members of the earl’s circle of friends and advisers. They also observe the manner in which Harvey’s systematic reading of Freigius—well represented by a carefully ramified tree in the front matter of the book whose roots and branches embody fundamental categories of legal thought (taken even to a quarternary level of sub-division)—appears to have been coordinated closely with another sub-set of books in his own library, in particular Nicolaus Vigelius’s Iuris civilis totius absolutissima methodus (Basel, 1561; British Library C.60.e.14); and Ioachim Hopperus, In veram iurisprudentiam Isagoges(Cologne, 1580; Gonville and Caius, Cambridge H.6.12). 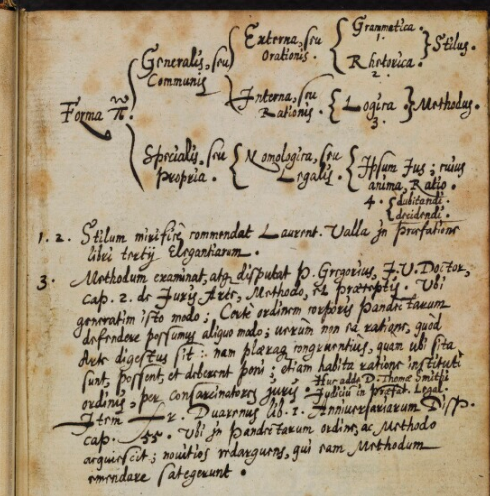 Harvey’s coordination of notes and virtual conversation between these and Freigius’s Synopsis pandectarum suggests that he particularly prized the latter for its “method of general logic” (vs. Hopperus’s more “particular legal method,” for example). At the same time, the ever-pragmatic Harvey was not himself a stickler for strict method and precise legal dialectic:

The best laws are precious things, even without the best method. I am content with making a virtue of necessity…the wisest and most useful means of accomplishing anything. I think carefully about the goal, working more punctiliously on a particular form of justice than a general form of method, just as I do on internal questions of logic, compared with external questions of style. It does not please me to please others. And it does not please me that they are displeased by things that have been considered and tested (front matter, emphasis added).

Though not a commonly reprinted book, its author was certainly important to Harvey for he listed Freigius as a “famous writer of Germany” in the long catalogue of contemporaries that had witnessed their own personal esteem for Harvey himself, either in print or in personal correspondence (see Harvey, Pierces Supererogation, 1594, sig. F1r) in one of his several very public, but largely unsuccessful, printed “quarrels” with the leading Elizabethan pamphleteer and satirist Thomas Nashe. Many copies of Freigius’s Paratitla survive in institutional collections, perhaps aided by its association with the much-admired, if also controversial, Basel printing house of Henricpetri, which produced many famous books; perhaps the best known of these, at least in the latter day, is their 1566 edition of Copernicus’s De revolutionibus, in addition to serial Henricpetri publication, in ever expanding editions, of Sebastian Münster’s ubiquitous, illustrated world encyclopedia the Cosmographia liber. See Lisa Jardine and William Sherman, “Pragmatic Readers: Knowledge Transactions and Scholarly Services in Late Elizabethan England,” in Anthony Fletcher and Peter Roberts, eds., Religions, Culture, and Society in Early Modern Britain: Essays in Honour of Patrick Collinson (Cambridge: Cambridge University Press, 1994), 102-24. Chris Geekie, AOR Bookwheel Blog Entry, “Swedes, Lawyers, and Pi.” 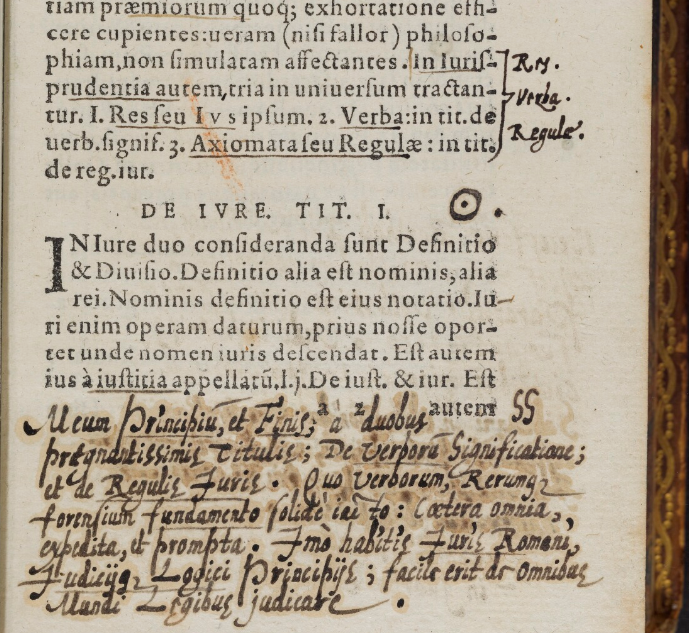