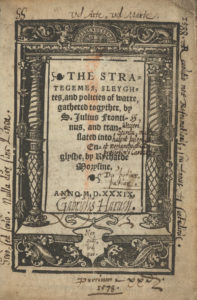 This book, produced by Henry VIII’s longtime official printer Thomas Bethelet was translated from the Latin by the accomplished Henrician diplomat, humanist, and propagandist Sir Richard Morison. Morison, one of the earliest advocates in England for the modern works of Machiavelli (represented elsewhere in the Archaeology of Reading corpus), combined the latter two of his many activities—humanist scholarship and militant propaganda—to help gird the island nation for war with France and the Holy Roman Empire. The four-book, military Strategemata of the ancient Roman Sextus Julius Frontinus seems (at least in early modern historical retrospect) to have been an ideal choice, for the Roman general had presumably based part of his study on his pursuit of war with the tribes of Britain and Germania. In truth, this is difficult to tell because Frontinus’s work is generic in nature, and likely a derivative imitation of other more significant ones by military theorists such as Valerius Maximus.

The Strategemes of this former legate of Britain nonetheless served a latter-day purpose, assuring its dedicatee, Henry VIII himself, of Sir Richard’s capable support through scholarship and letters turned to eminently practical purposes. A similar impulse of scholarly application and of being “studied for action” would dominate Gabriel Harvey’s own approach to classical literature, much as it did other modern authors like Machiavelli.

Harvey purchased his Frontinus in May of his personal wunderjaar of 1578 (apparently for 20 pence), but revisited the book at least twice again later, annotating it thoroughly. The first date to appear in Harvey’s hand is 1580 (notably, that same year is also written by Harvey on the title page of his heavily annotated Machiavelli, Arte of warre): the year of an invasion of Spanish and papal troops in Ireland and the much-publicized inauguration of the Jesuit Mission to England; also the year of the “English Fury” of Mechelen against Spain, the Low Countries apparently being more on Harvey’s mind at the time: “Is not Ingland ouerlauish, in ayding [the] Low Cuntryes, & France?” (fol. 76v). The motivation behind Harvey’s subsequent repair to the Stategemata in 1588, the year of the invading Armada, is unambiguous, as he indicated in the title page annotation: “1588. The Revolution of my Reformation, or the Year of my Habituation” [Reuolutio mea[e] Reformationis, seu Annus Assuetudinis]. His association between the account of Cassius’s use of fire ships and those that helped to defeat Philip’s Armada, for example, seems to vindicate utterly Harvey’s pragmatic antiquarian impulse: “Owr Inglish pollicy against the Spanish Armada, this other day. ἕυρηκα [eureka]” (fol. 105r). See Tracey Sowerby, Renaissance and Reform in Tudor England: The Careers of Sir Richard Morison, c. 1513-1566 (Oxford: Oxford University Press, 2010), esp. 107-9. K. F. Pantzer, “Berthelet, Thomas,” in Oxford Dictionary of National Biography, online ed., January 2008, http://www.oxforddnb.com.