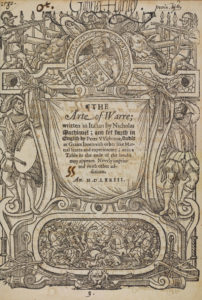 Harvey read the ancients and the moderns side by side, as did Machiavelli before him, something that is clear throughout the Elizabethan reader’s annotations in this well-worn copy of The arte of warre. The translator of the Arte della guerra, one of the earliest major works of latter-day military theory to appear in the English vernacular, may indeed have worked from an army tent, having served as a professional soldier to the Holy Roman Empire in its wars with the Ottomans for nearly a decade. Whitehorne’s literary efforts will also have drawn some inspiration during his earlier travels c. 1550 through Italy with his countryman and fellow translator of modern Italian works, Sir Thomas Hoby (the translator of Harvey’s annotated Castiglione, also in the Archaeology of Reading corpus), in search of ancient Roman antiquities. This coincidence of interests conspired to present to the English-speaking world the first translation of Machiavelli on modern warfare, which he published in 1560 with his own update of Machiavelli, Certain Waies for the Orderyng of Souldiers in Battelray, which includes the latest innovations in artillery, field communications, siege machinery, and fortification (Harvey annotated both these 1573 titles, though they are not bound together; his annotated Certain Waies is held in the library of the UK Ministry of Defence). The publication history of this edition of the Machiavelli is not entirely clear, though its dedication to Elizabeth I is as thoroughly patriotic as its contents are pragmatic. Whitehorne’s works were reprinted in multiple editions, and both tracts proved influential in the history of English military theory. The charming suite of fourteen illustrations of military formations at the end of Harvey’s Machiavelli is purely, and imaginatively, comprised of everyday type from the printer’s shop.

Unlike Machiavelli, Whitehorne did not detest the novelty of gunpowder in the execution of war. It was an original point of honor that Harvey’s long, loving, and effusive note on the verso of the title page seems alive to, but ultimately willing to concede. Harvey begins in English, commending to “euery publique, or priuate Actor in [the] world” the arts of defense, riding, and navigation, though it is an absolute requirement for him that “purposeth to sturr in greater actions” to master war above all else, together with the “brauest new Inuentions of Pyrotechny, Fortification, & such like.” His exposition then switches suddenly into Latin at the moment he turns to Caesar’s precedence (“Nothing to me is singular or distinguished, without the War of Caesar”), before granting, diplomatically, that a vigilant dedication to technological innovation had grown to become a thing of absolute necessity. “Pyrotechnics and Fortifications” become, respectively, the activities of “Vulcan and Daedalus….He who imitates, in the one [i.e. pyrotechnics], Vulcan or Prometheus, in the other [fortifications], Daedalus, or Archimedes, most dextrously will he be able to achieve what he wishes, and most efficiently.” See David Lawrence, The Complete Soldier: Military Books and Military Culture in Early Stuart England, 1603–1645 (Boston: Brill, 2009), 36-38. Gervase Phillips, “Whitehorne, Thomas,” in Oxford Dictionary of National Biography, online edn, Jan 2008, http://www.oxforddnb.com. 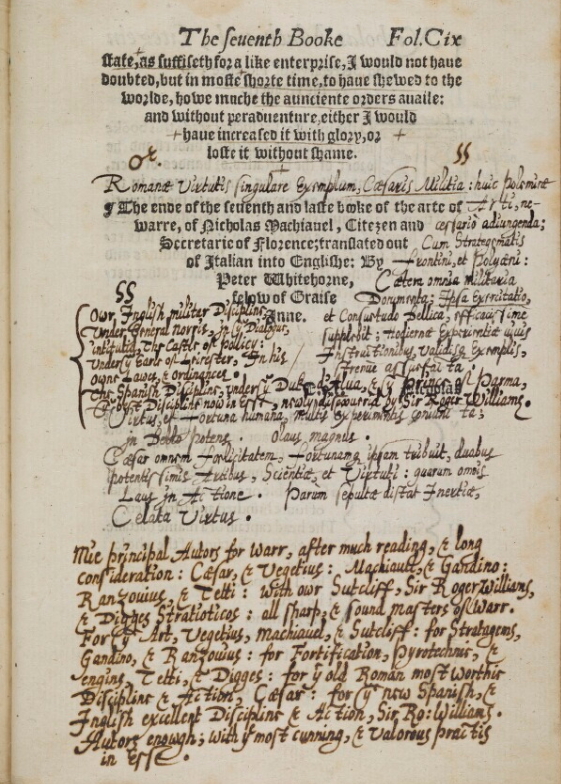