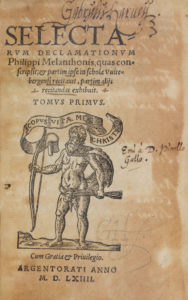 Melanchthon’s declamations, or university lectures, at Wittenberg constituted a performative element of his broader commitment to humanist curricular reform within higher education. Taking place at regular intervals as part of a student’s total immersion in Latin and Greek rhetoric and grammar, logic and dialectic, the declamations also frequently touched upon fundamental components of reformed Lutheran theology, in addition to decidedly nontheological matters such as Melanchthon’s often quoted exposition of the life and works of Erasmus. Erasmus was ubiquitous in the schoolrooms and universities of the early modern period, and Melanchthon famously harnessed and revised his educational works in the service of advancing Protestant evangelical teaching. The German Lutheran was paid the highest compliment through the customary inclusion of both men’s educational tracts in pedagogical anthologies printed throughout the middle decades of the sixteenth century. Harvey’s copy is preserved in a handsome, finely tooled early German binding on wooden boards, which bear the unmistakable portrait of the author in blind stamp.

Melanchthon’s Selectarum declamationum is an excellent example of a book that Harvey annotated only lightly and selectively, distinguishing, in a particular sort of way, a small array of topics that were of most interest to him from among many that he otherwise left untouched. Some of these are evident only when one examines evidence of Harvey’s customarily aggressive underlining of the original printed text, which yields in his Melanchthon repeated attention to the gout [podagra] (fols. 338r-38v, 383r)—a topic to which Harvey dedicates full-blown, discursive marginalia in his annotated copy of Olaus Magnus’s 1555 Historia de gentibus septentrionalibus (fol. 286v), also part of the Archaeology of Reading corpus. Of greatest fascination to Harvey in Melanchthon are the lectures on astronomy (fols. 173v-79r) and mathematics (fols. 184r-90v), however, and his concern for the heavens is clearly echoed in more extensive notes preserved among the endpapers of this book.

An early title-page annotation reveals that the volume was acquired from one “Pinello” in France (“Emi à D. Pinello Gallo”), perhaps a reference to the legendary Italian collector of the second half of the sixteenth century, Gian Vincenzo Pinello; though this remains a speculation, forbidden books by Protestant authors were known to have been purged from his famous Paduan library before the compilation of an extant inventory of 1604. See Marcella Grendler, “Book Collecting in Counter-Reformation Italy: The Library of Gian Vincenzo Pinelli (1535-1601),” Journal of Library History 16:1 (Winter 1981): 143-51. On Melanchthon see Sachiko Kusukawa (ed.), Melanchthon: Orations on Philosophy and Education (Cambridge: Cambridge University Press, 1999).