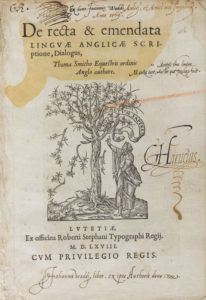 A fellow son of Saffron Walden and known for his own precocity at Cambridge, Smith was an elder patron to the much younger Harvey just as he had begun to flourish intellectually upon his matriculation to Christ’s College, Cambridge in 1566. Sir Thomas appears to have provided considerable guidance in personal and epistolary exchanges, and it was probably as Harvey contemplated Smith’s own life and career that the young scholar sought particular advice about the study of law (Smith was Regius Professor of Civil Law and made a study of the subject on a scholarly grand tour to France and northern Italy decades earlier). Smith also maintained a lifelong interest in language (much as Harvey did) and linguistics, making a name for himself through his advocacy of Erasmus’s reformed method for pronouncing ancient Greek during the early 1540s, and which also extended to the English language, culminating in the first Paris editions of his works on Greek and English, including the present De recta & emendata Linguae Anglicae scriptione (1568).