Practiced for centuries by theologians and historians alike, the development and advancement of chronology was reaching its high-water mark during Dee’s lifetime. This work by Matthieu Beroald (or Brouard), a Calvinist theologian and professor of philosophy at the University of Geneva, comes at the beginning of such an uptick. Following a model established in the Middle Ages, the focus of the Chronicum began with the reckoning of time since the creation and the derivation of the worlds’ peoples from Adam and his descendants, a focus which abruptly narrowed to the descent of the French monarchy. However, where most earlier chroniclers did not offer sustained discussion of the reckoning of time, Beroald devoted the entire first book of the Chronicum to the division and variance in the measuring of years, the observation of astronomical signs, and the methods used by pre-Christian authors, along with their errors where their works deviated from the model he proposed. 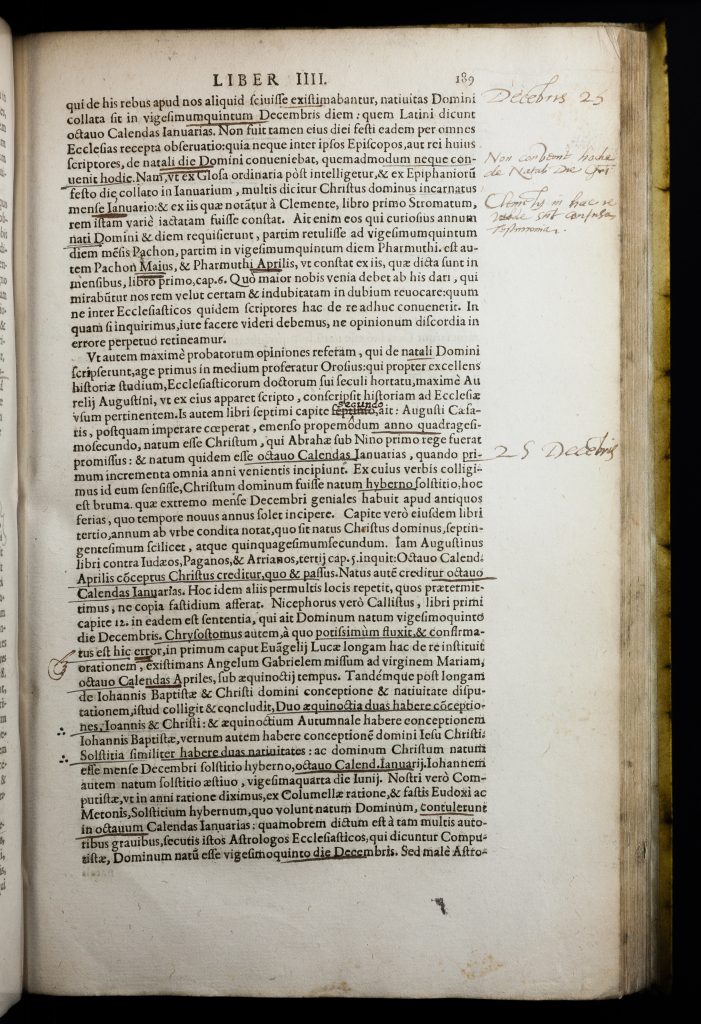 Sixteenth-century chronographers embraced a wide range of disciplines extending from the study of planetary movements to ancient languages in their efforts to critique and reconcile ancient texts. As its subtitle suggests, the Chronicum drew primarily upon scriptural authority to determine a basis for accurate chronological description, a premise which would draw criticism from later scholars such as Joseph Scaliger. Dee’s reading of the work merges his historical and astrological interests and provides an example of the information which a similarly learned contemporary of the author would have drawn from it as well as the methods he employed to do so. Throughout, Dee is concerned with noting the practice of astrologers along with their errors, as described by Beroald. The first book, with its observations on varying measurements of years, would have fit well with his readings of Crusius’s De revolutionibus and its program of calendar reform. An entire later chapter of the fourth book of the Chronicum (pp. 186-97) was dedicated to determining what Beroald believed was the correct placement of the date of Christmas (in October rather than December), an argument which Dee sketches in the margins.

Beroald’s biblical focus also brought in two supposed ancient authors for particular censorship. The first of these was Hermes Trismegistus, a supposed contemporary of Moses and the foundational figure for the Prisca theologia, which foretold the coming of Christ. More interesting to Dee was the discussion of Berosus of Chaldaea, a lost author whose corpus had been reconstructed by the forger and Dominican friar Giovanni Nanni, also known as Annius of Viterbo. Annius’ forged Berosan artifacts, together with the lengthy commentary on antiquity he composed around them, circulated widely in the sixteenth century, provoking condemnations and criticisms as well as staunch defenses of Annius and his concocted antiquities. The exploration of the Trojan War as a foundation for historical authority provides a link to the other histories that Dee read. In the tables which serve as one of the indexes to the Chronicum, the discrepancies between the dates of the fall of Troy in Beroald and those of Latin authors are noted.