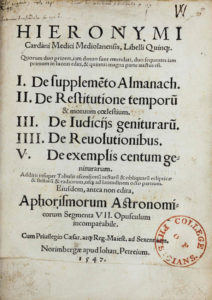 As was the case with many of the other physicians read by Dee, the interests of Girolamo Cardano (1501-76) covered the full range of humanistic endeavors and scholarly investigation available in the sixteenth century. Like his slightly earlier contemporary, Paracelsus, Cardano’s thought combined natural history, theology, chronology, and astronomy in a unified natural philosophy. Unlike Paracelsus, however, Cardano ultimately enjoyed success in his own lifetime as both a physician and an author. As a writer, he was as prolific as he was irascible, publishing nearly fifty discrete tracts ranging from pamphlets to encyclopedic volumes on the mathematical sciences, astronomical motion, and, finally, an engaging self-portrait of his own life. As the title of this compilation suggests, many of his treatises were reprinted, revised, and expanded as time went on.

This was particularly true of some of Cardano’s earliest works – the genitura or horoscopes of famous people. The first printings of these came in Milan in 1538, as part of a similar group of prognostications, and had swelled to more than sixty in the edition published in Nuremberg in 1543. By the time of this edition (the third) their number had grown to approximately one hundred, along with several texts on their interpretation and the proper reckoning of time to ensure their accuracy. Cardano would later fall afoul of the Inquisition, in part because of one particular horoscope he published—that of Jesus Christ—which he had discovered during a journey to Scotland in 1553, undertaken around the time that Dee was reading this particular copy. This reading came on the heels of a personal meeting between the two itinerant astrologers in London, during which they inspected a stone imbued with celestial power in the presence of another Cambridge classicist, John Cheke, former tutor and then-adviser to King Edward IV.

The correction of Cardano’s theories of time and, subsequently, the large number of horoscopes in the volume, consumed Dee’s attention, and the volume appears to have served him as part theoretical treatise, part workbook. The front and rear leaves record other “example” horoscopes gleaned from firsthand knowledge or, in some cases, likely from the reports of monstrous or abnormal births that circulated in the ephemeral literature of the period. Dee’s notes reveal that he consulted the text of these horoscopes alongside that of the 1543 Nuremberg edition (which he owned along with at least part of the 1538 editio princeps). His library catalogues further indicate that he owned many of Cardano’s works by 1557, and would go on to acquire many more. Dee’s interest in horoscopes would lead him into similar trouble, although much sooner than would the Italian surgeon. In 1554 he was accused of plotting against the regime of Mary Tudor, and found himself imprisoned in the residence of the Bishop of London, Edmund Bonner, an experience alluded to in his copy of Andreas Alexander’s Mathemalogium in this collection. This fact makes the association of one of Cardano’s astrological aphorisms (“Those to whom great favor accrues suddenly are likely to experience equally sudden catastrophe”) with the fate of Lady Jane Grey (sig. 207v, also displayed below), of particular interest.