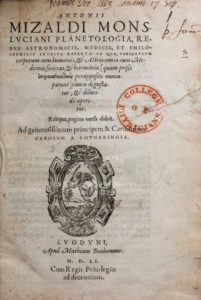 Dee’s library at Mortlake was full of the works of contemporary thinkers and medical practitioners who attempted to write what might be called philosophies of medicine. Their works attempted to reconcile the present, and often evolving, practices of medicine with the classical tradition, as well as with the philosophical and theological underpinnings of the universe as it was known to them. The Parisian surgeon Antoine Mizauld (1510-1578), who served as adviser to Marguerite de Valois, is perhaps the most well-known of the French medical humanists who attempted to harmonize the movement of celestial bodies and the health of specific patients. Mizauld’s medical philosophy fused the teachings of Galen, Plato, and Aristotle with knowledge that he thought to be even more ancient— the writings of the so-called Hermes Trismegistus, a spurious pre-classical figure who served as the unifying point of many fields of knowledge in the Renaissance.

In a similar manner to his contemporary Gerhard Dorn, Mizauld’s published work established him both as an authority in and chronicler of the field, as well as a biographer of its practitioners. The Planetologia combined Mizauld’s own dialogues and treatises on astronomy and medicine with the key classical authorities known to sixteenth-century cosmographers, translated and excerpted by Mizauld’s contemporaries. The short tracts in the Planetologia would be put to equally industrious use by those who encountered them, and would even appear in more general works of prose by the end of the sixteenth century.

In Dee, Mizauld’s work found a reader not only eager for new information, but versed in the sources that underpinned it. The date inscribed on the title page suggests its reading in a firmly educational context, as Dee’s mathematical knowledge expanded into the disciplines of astronomy, chronology, and divination. The opening chapters on the nature of the planets and stars receive Dee’s annotations, while the later defenses of astronomy are largely passed over. Furthermore, the questioning nature of some of Dee’s notes in the book may suggest that he was reading the work alongside the sources it cited while pursuing his own questions within it.