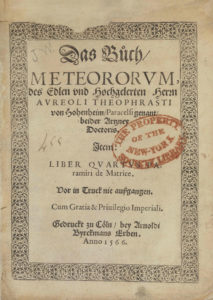 Perhaps the most controversial of Paracelsus’ medical and material endeavors was his attempt to meld the traditional four elements of Aristotelian physics and Galenic humors into a triumvirate of prime elements (mercury, sulfur, and salt) that would suffice to account for the range of phenomena encountered in the body. Paracelsus’s writings in the Meteororum seek to relate the three prime elements to the Trinity, and in doing so to offer a sustained critique of Aristotelianism. Similarities to the Paracelsian works printed in the early 1530s suggest that the books of the Meteororum were written around that time, but this edition, printed in Cologne by the heirs of Arnold Birckmann, is the first to appear. It was quickly followed by another vernacular edition as well as a Latin translation (De meteoris), which appeared in 1569.

Dee’s annotations here focus on this trinitarian aspect of Paracelsus’s thought, noting references to the individual elements but questioning Paracelsus’s logic in setting out his schema. The flyleaves of the Meteororum also demonstrate the lengths that Dee went to locate and read Paracelsian writings. In an extension to the tables in the Baderbuchlin, the Meteororum’s front matter lists an extended bibliography of Paracelsus’s works and the names of two individuals who knew where they could be found, along with drawings of an alembic posited to be ten times more effective than the standard. In his diary, Dee records that he discussed the author with Conrad Gessner during the second phase of his travels through Europe in 1563, and over the next two decades collected a large number of Paracelsian works in his library, the vast majority of which were stolen after he left England in 1583.

The marginalia in this book were clearly valued by a later reader: John Winthrop, Jr., who inscribed the same note in the Baderbuchlin:  “I have divers other bookes both printed & some manuscripts [that] came out of his study, in them he hath likewise written both his name & [deleted: other] [deleted] notes: for w[hic]h they are farre the morre pretious.” In addition to his activities in the government of the Massachusetts Bay and Connecticut colonies, Winthrop also shared Dee’s interests in chemistry, astronomy, and medicine.