How did John Dee make sense of what he was reading? We at AOR have the luxury of examining Dee’s annotations with the apparatus of stable critical editions, the extensive reserves of research libraries, and the even more capacious Google search box at the ready. While Dee enjoyed none of these things, the annotations in his books hint at the breadth of information he brought to the works that he read, and remind us that no one activity dominated his reading. We also get a better sense of how comprehending a book even at the most basic level, could require specialist knowledge in the sixteenth century.

The gloss in Cicero’s Epistolae ad familiares (Letters to Friends), for example, mostly consists of copying out names, places, and even particular words and turns of phrase from the text, while correcting mistakes in it. I was surprised at how many of Dee’s critical comments could only be explained through recourse to footnotes in my modern edition. Some of the typos and omissions could be caught by an educated Latin speaker, but others, like the breaks between letters, show recourse to other versions of the text, perhaps in the form of printed or handwritten commentaries that circulated alongside other editions of Cicero. 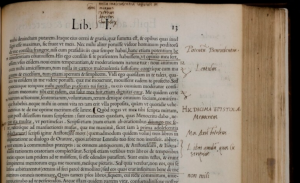 In other words, his two-volume, deluxe collection of Cicero’s works couldn’t be met with the same implicit trust (or perhaps willing acknowledgment of my own ignorance) that I brought to the indices and appendices of the Loeb Cicero, trying to keep up with what Dee was putting down.

Aside from being a humbling experience, transcribing these glosses raises an important question in addition to that of Dee’s own comprehension. As a scholarly resource, our transcriptions should allow a modern reader to understand Dee’s annotations, and that can mean tagging more detailed information about people and locations into the transcriptions and translations. But what if those tags might not agree with Dee’s own identifications? In other words, If Dee doesn’t agree with the (modern) text, are we allowed to disagree with him?

Historians of reading can afford to be more flexible than textual critics in how we treat variant or “multiple” readings without needing to label them “misreadings” or “mistakes.” Even so, these departures put us in a place where no clear or convincing explanation can be drawn that doesn’t pass through Dee’s own mind. Fortunately for us, Dee’s marginalia across several books offer evidence of his own approach to the same editorial problem.

Dee’s library, like his reading, was vast and varied, containing the most current reference sources of the time – printed bibliographies and anthologies like the Cicero volume – as well as “ancient” manuscripts in their original languages. He thus had a fairly sophisticated understanding of how mistakes might be made, and (in keeping with his contemporaries) we find this on full display in his use of ancient etymologies. Historical and antiquarian writing of Dee’s time was full of telling toponyms that revealed the ancient history of places or peoples, if only their true meaning could be extracted from the corruption of time and translation.

This technique had been practiced by historians for centuries, and as a result Britain’s ancient history was a minefield of mythical associations. The prevailing narrative, first set in writing by Geoffrey of Monmouth in the early twelfth century, was hotly debated in and around Dee’s own time. It linked the island’s name to Brutus the Trojan, a great grandson of Aeneas who had led a band of Trojan exiles from Greece through the Mediterranean and France before defeating the island’s former (gigantic) inhabitants. Brutus then named the island Britain and built its first city, a New Troy that would eventually be renamed London in memory of another legendary king, Lud. 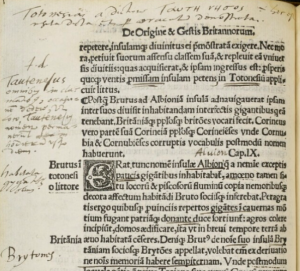 While Geoffrey’s inaccurate or all-too-convenient descriptions of places had aroused suspicion (or derision) among historians since Geoffrey’s time, in his printed copy (Christ Church Oxford Wb.5.12), Dee treads this well-worn ground and shows himself to be a master of the name game.

His notes in the early chapters of the Historia locate the would-be Britons near the Acheron river in eastern Greece and as they move through the Mediterranean, Dee comments upon the probability of the account (both in general and in his specific copy) by investigating not only changes in language, but the havoc that their recitation and orthography might wreak upon unsuspecting generations of copyists and translators. Here, Dee explains how Tragecia, a small island near Corfu the nonexistent island of Lergetia (or in some copies Leros which, though extant, was in the wrong direction), after one copyist mishears “Targetia” and a second confuses the Greek character tau for a lambda. 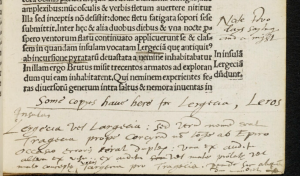 Simple enough, provided that you come to your sixteenth-century book with a working knowledge of manuscript copying practices! We also see Dee taking into account the distance between locations here and in the pages that follow, constructing plausible alternatives where necessary.

For Dee, it was possible (perhaps even routine) to learn from a source and critique it at the same time. “Getting it right” involved accounting for and explaining a certain amount of error.  His point, and one well taken by those studying the ways early readers approached their books, it is that there can be quite a lot to learn from mistakes.