Last Thursday (13.10.2016) the UCL Common Ground provided the stage for our workshop in celebration of AOR going live earlier this autumn (see the previous blogpost). Posters and postcards had been circulating, and with clear results: the afternoon was very well attended. 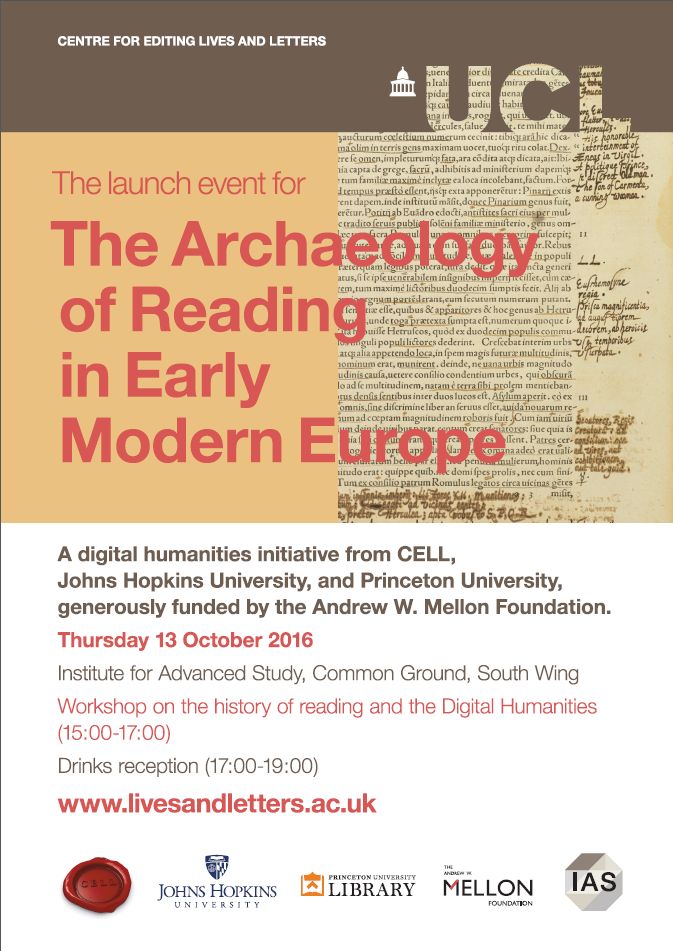 A panel of AOR-anciens gave four concise, evocative presentations, intermitted with Q&A sessions.
Earle Havens started with a general introduction and spoke of the genesis of AOR, now shrouded in near-legend: the article by Lisa Jardine and Anthony Grafton, ‘Studied for Action: How Gabriel Harvey read his Livy’ (1990), and an inspired meeting between Earle and Anthony in a café in Louvain. The desire to study the history of early modern reading practices in a systematic way gave the project its spark of life.

Three themes connected the presentations: the project’s clear-cut definition of ‘big data’ as ‘too much information’ that, as Matt Symonds explained, is beyond operating with data individually. Much like for Gabriel Harvey and his contemporary readers, the conditio sine qua non for AOR has been to create a framework to deal with such an information overload – to structure the data, as Jaap Geraerts put it in his presentation on the practical aspects of constructing a XML-framework.

Second, the importance of cross-sectional collaboration. As a scholarly resource, it is vital for AOR to build that framework not as ‘words on a page’ but as a mobile, flexible creature that brings together conservational, technological, and intellectual imperatives. AOR exists by the grace of the symbiosis of its bibliographical, technological, and scholarly expertise.
And third, the way in which AOR broadens the research horizon. As became apparent during the Q&A sessions, a resource like this makes new research questions possible: to compare Harvey’s marginalia with Harvey’s own books, for example. Or, as Arnoud Visser from the University of Utrecht suggested in his presentation in which he approached AOR from the viewpoint of an end-user, to start reading between the lines of marginalia and look at what is omitted, not talked about, or implicitly alluded to. Other interesting questions arose during the Q&A, for example asking about the curatorial aspects of assembling the corpus.

When we say workshop, it was only the first leg of the afternoon. The panel discussion was followed by a reception in the Common Ground, during which both the Leffe and the inspiration flowed lavishly. If you want to (re)visit the workshop: a video will be made available in the near future.