Last week was the 2015 edition of the Renaissance Society of America (RSA) conference, held at the Humboldt University of Berlin (26–28 March). It’s one of these American mega conferences, the size of which can be quite overwhelming, and CELL unanimously decided that easing into it was best done by eating some traditional German food in combination with an appropriately sized glass of beer. 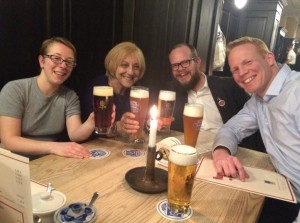 The AOR team was well represented at the conference: Earle Havens and the Charles Singleton Center for the Study of Pre-Modern Europe had organized countless panels, including a couple of really exciting ones on late medieval and early modern marginalia. CELL, for the first time being an associate organization of the RSA, had organized two panels, both of which were scheduled for Saturday morning (unfortunately clashing with some of Earle’s panels, something that is unavoidable at conferences of this size). The CELL panels consisted of strong papers on a large number of topics, including Quakers and publishing, language learning and early modern travel, and legal records and life writing, to name but a few.

The majority of the activities regarding AOR were scheduled on Friday, the second day of the conference. It all started—that is, after we finally managed to get the IT working—with a panel outlining the project and providing information about its goals, its methodology, and its technical infrastructure. Matt Symonds gave a great overview of AOR in his paper, situating it among other Digital Humanities (DH) projects and explaining why, both for scholars and IT specialists, this is such an exciting project. Jaap Geraerts followed with an explanation of the XML schema and the (editorial) decisions that underpin it, whereas Lisa Jardine conveyed what she, as an end user of AOR, wants to get out of it and how AOR moves away from Harvey and enables one to discern reading strategies and practices. The session was very well attended and we’re pleased to say that it got some exciting responses on Twitter:

Directly after this panel it was time for the Roundtable, which consisted of our Principal Investigator (PI), Earle Havens, and the two co-PI’s, Lisa Jardine and Tony Grafton, and was chaired by Bill Sherman. Lisa and Tony explained the context of their groundbreaking article “Studied for Action” and reflected on the historiographical developments that took place after its publication, while Earle related AOR to this article and to the current state of this field of research, further stressing that we have moved towards the study of reading practices rather than examining marginalia in order to learn more about the life of the annotator. Matt then showed the audience a first glimpse of the AOR website and the prototype viewer, after which the floor was opened for questions.

It’s safe to say that RSA 2015 has been a great success for AOR. We think that we’ve generated a lot of interest in and awareness of our project, and it was great to exchange ideas with other scholars who are working on similar topics. Moreover, it was a pleasure to see so many colleagues and friends, and we’re already looking forward to RSA 2016. See you in Boston!

P.S. P.S. Liesbeth Corens has done an amazing job collecting and organizing all the tweets of the RSA on Storify. For the tweets about CELL/AOR panels and the “Studied for Action” roundtable, see: RSA15 tweets